How to undo commits in Git?

you should have Basic knowledge of Git to do so see this: What is Git? How to Use Git?

What if you accidentally committed the wrong files to Git, but haven’t pushed the commits to the server yet.
Is it POSSIBLE to undo those commits from the local repository?

your answer is Yes!
We will explain a few different techniques to undo your changes based on the stage of the change in your current development. Also, keep in mind that nothing in Git is ever deleted.
This means that it is still possible to view your detached commits with git reflog command and access them with direct commit ID.
they will continue to be available until Git automatically cleans these detached commits.

You can discard all local changes, but save them for possible re-use later using:

Or, you can discard local changes (permanently) to a file using:

Or, you can easily discard all local changes to all files permanently using:

note:
git stash is very recommended since you are able to keep your work saved and change to another branch and do some other work. Then use git stash pop to continue where you left.
Here are other git lash commands:

Local changes can be on various stages and each stage has a different approach on how to undo them, these main stages are: before committing, after committing, after pushing to a remote repository.
When a change is made. Git proposes a solution to discard changes to a certain file.
Suppose you edited a file to change the content using your favorite editor:

in this case, you either added your files to be staged or not, to be tracked or not if you just created them.
you check the status of your files, using this command:

if the above was the case then you haven’t committed your files Yet.

Next, you will learn how to undo changes before and after committing.

Undo changes Before committing in the staged and unstaged state:

at this point, you have probably added your target files to your local repository using:

you can check the status of your files whether they were actually added using:

Now you can use one of these commands to undo what you have done:

Without history modifications(everyone can continue doing their work):

After committing, all your changes are recorded by the version control system.
And since you haven’t pushed them to a remote repository your changes are Private, and can not be viewed by other developers.

Let’s assume there are 4 commits in our example A, B, C, D. and B is the one who is Buggy or you just want to delete it.

Here is how to do it:

note:
in this case, resetting to B and do commit E is not recommended. (it will cause problems with pushing and if forced pushed also with other developers).
and using the method of creating a new branch will let everyone else do their work. and you can merge it back in later.

There is only one command for history modification and that is git rebase.
Using this command with the -i flag allows you to:

note:
To perform the actions above let’s use the same example above where you have four commits A, B, C, D. and you want to delete B.
in this case use:

open your editor write drop in front of commit B, but default pick with all other commits. Save and exit the editor to perform a rebase.

But if you want to Edit B do this:

Rebase the range from current commit D to A.

In this case, you need to do the same as Deleting B, you only need to write edit instead of drop.

Redoing an Undo in Git:

Yeah, In some cases you realize you should never undo a change whether it was by mistake or not.
Luckily, this same command can solve that problem:

git reflog enables you to recall detached local commits by referencing or applying them via commit ID.
note:
Git regularly cleans the commits which are unreachable by branches or tags.
So don’t expect it to see really old commits in the reflog!
Here is an example of tracking old commits:

the first column (e.g : b673187), represents the commit ID.
Where the following column, the number next to HEAD (e.g{5}), indicates how many commits ago something was made.
afterward, the indicator of the action that was made (commit, rebase, merge, …), and then, in the end, the description of that action.

Undo changes pushed to the repository:

Undoing changes without changing history is the most preferred way of undoing changes in any remote repository or public branch.
The best way to do so has always been Branching ever since you want to retain the history of faulty development, yet start anew from a certain point.

How to revert changes in certain commit-id?

→ Never modify the commit history of master or shared branch!
→ Modified history breaks the development chain of other developers!

keep in mind that, even with modified history, commits are just detached and can still be accessed through commit ID 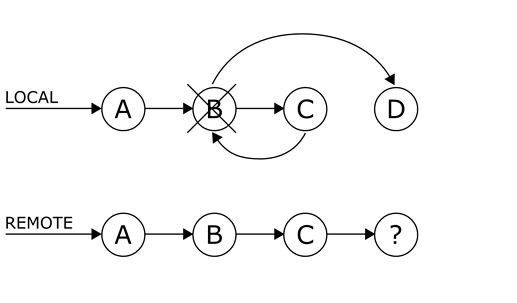 How to undo commits with modifying History:

After setting what to modify (how far in history or which range of old commits), use:

This command displays all the commits from the current version to the chosen commit ID and then allows modification, squashing, deletion of those commits.

→ It is important to notice that comment from the output clearly states that, if you decide to abort, then do not just close your editor (as that will in-fact modify history), but remove all uncommented lines and save.

→ git rebase should be used carefully on shared and remote branches. But don’t worry, there will be nothing broken until you push back to the remote repository (so you can freely explore the different outcomes locally).

first, you need to run git filter-branch.
this enables you to rewrite history with certain filters. This command uses rebase to modify history and if you want to remove a certain file from history altogether use:

Note:
git filter-branch command might be slow on big repositories!
That’s why there are tools that can use some of Git specifics to enable faster execution of common tasks (which is exactly what removing sensitive information file is about).

An alternative is the open-source community-maintained tool BFG.
Since these tools focus on specific use cases they can be much faster.