What Are Lifecycle Hooks In Vuejs And How Do They Work?

There are times where you want to add your own code at specific stages of your app.
by your own code, I mean that you will be able to trigger events, call functions, etc.
and by specific stages of your app, I mean your Vue app’s different instance stages
such as ( when the instance is created, or before it is mounted or when it is updated, or before it is updated…etc).
here is a diagram of how lifeCycle hooks work in VueJs: 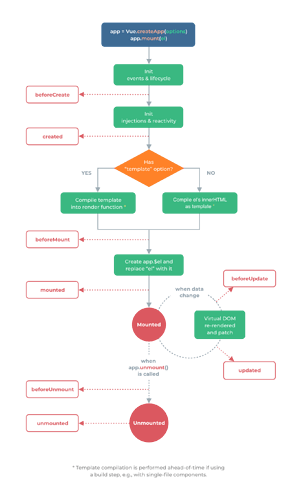 note: it is not declared within methods. and methods can be defined within it.
in the example above the hook is not called during server-side rendering., but only the frontend rendering.
the Hook “updated” will be called after a data change causes the virtual DOM to be re-rendered and patched.
it works just like watching data changes but this time, watching your entire Vue app for any changes. want to know about watching data and prop changes in Vuejs visit this topic: https://stopbyte.com/t/how-to-watch-nested-props-and-data-in-vuejs.

now let’s see all LifeCycle hooks are there in Vue.js:

everything defined within this Function will be Called synchronously after the instance has been initialized, but before data observation and event/watcher have been setup.
example:

everything defined within this Function will be Executed synchronously after the instance is created.
meaning after all these topics have been set: "computed properties", "methods" and "watch/event" callbacks.
However, the instance is not yet Mounted, and the $el property will not be available yet.
example:

this hook is called right before the mounting “above” begins: the render function is about to be called for the first time.

Please note: This hook is not called during server-side rendering.
example:

this hook called after the instance is mounted, where element, passed to Vue.createApp({}).mount() is replaced by the newly created vm.$el . If the root instance is mounted to an in-document element, vm.$el will also be in-document when mounted is called.
note:
mounted does not guarantee that all child components have also been mounted.
so in case you wanted to wait until the entire view has been rendered, you can use vm.$nextTick inside of your mounted lifecycle hook.

Example:
with waiting till child components are mounted as well

this hook is called when data changes and before the DOM is patched.
it is very convenient if you want to access the existing DOM before an update, e.g. to remove manually added event listeners.

this one is called after a data change causes the virtual DOM to be updated(re-rendered and patched).
At this point the component’s DOM will have been updated, so you will be able to perform DOM-dependent operations here. However, in most cases, you should avoid changing the state inside the hook. To react to state changes, it’s usually better to use a computed or watchers.
Note: updated just like the “mounted” hook, does not guarantee that all child components have also been re-rendered. If you want to wait until the entire view has been re-rendered, you can use vm.$nextTick]inside of your hook.

this one is called when a kept-alive dynamic component is activated.

this is called when a kept-alive component is deactivated.

Called right before a component instance is unmounted. At this stage, the instance is still fully functional.

As the name suggests it is called whenever an error from any descendent component is captured.
This hook receives three arguments: the error, the component instance that triggered the error, and a string containing information on where the error was captured.
To stop the error from propagating further the hook can return false.
notes:

it’s called when virtual DOM re-render is tracked. The hook receives a debugger event as an argument. This event tells you what operation tracked the component and the target object and key of that operation.

Called when virtual DOM re-render is triggered.Similarly to renderTracked , receives a debugger event as an argument. This event tells you what operation triggered the re-rendering and the target object and key of that operation.